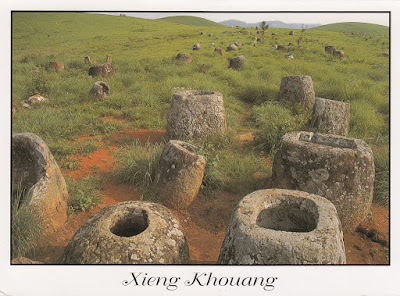 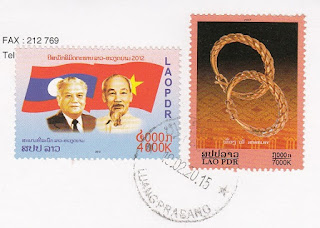 The Plain of Jars (Lao: ທົ່ງໄຫຫິນ [tʰōŋ hǎj hǐn]) is a megalithic archaeological landscape in Laos. It consists of thousands of stone jars scattered around the upland valleys and the lower foothills of the central plain of the Xiangkhoang Plateau (north of Laos). The jars are mostly arranged in clusters ranging in number from one to several hundred.
French researcher Madeleine Colani concluded in 1930 that the jars were associated with prehistoric burial practices. Excavation by Lao and Japanese archaeologists in the intervening years has supported this interpretation with the discovery of human remains, burial goods and ceramics around the jars. The Plain of Jars is dated to the Iron Age (500 BC to AD 500) and is one of the most important prehistoric sites in Southeast Asia.

Today I was reminded of my trip to SE Asia which happened exactly three years ago - man how time flies. I haven't managed to see this place on the rather tight schedule; hmm to be honest I haven't even heard of this place before getting to Laos. This place looks pretty awesome so I've sent a card :)