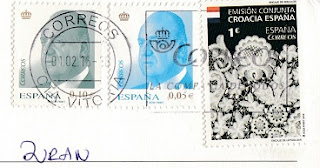 San Sebastián or Donostia is a coastal city and municipality located in the Basque Autonomous Community, Spain. It lies on the coast of the Bay of Biscay, 20 km from the French border. It is one of the most famous tourist destinations in Spain, and hosts the San Sebastián International Film Festival  every september. Along with Wrocław its the European Capital of Culture in 2016.
E Ana Ana, španjolska dušo :D Puno hvala na ovakvom pogledu i posebnoj markici!