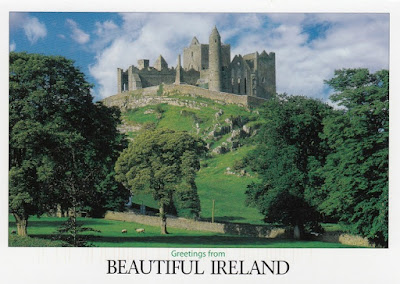 According to local mythology, the Rock of Cashel originated in the Devil's Bit, a mountain 30 km north of Cashel,  when St. Patrick banished Satan from a cave, resulting in the Rock's landing in Cashel. It is reputed to be the site of the conversion of the King of Munster by St. Patrick in the 5th century. (Gotta love all those legends with the devil ;))
The Rock of Cashel was the traditional seat of the kings of Munster for several hundred years prior to the Norman invasion. In 1101, the King of Munster, Muirchertach Ua Briain, donated his fortress on the Rock to the Church. In the grounds around the buildings is an extensive graveyard including a number of high crosses.
Beautiful, thank you Delyana!
(I think I must have swapped for this card around Halloween ;))
Posted by agi at 11:39