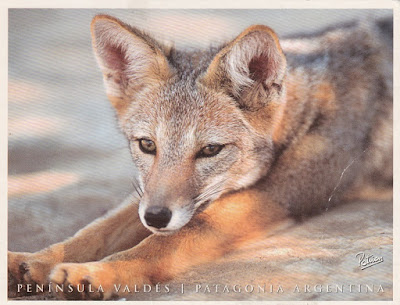 I have one this cute fox postcard in a lottery, how lucky :) Many thanks to Ana for organizing it.

The South American gray fox (Lycalopex griseus), also known as the Patagonian fox, the chilla or the gray zorro, is a species of Lycalopex, the "false" foxes. It is endemic to the southern part of South America. It is actually a small canid, measuring 65 to 110 centimetres in length. It is a largely solitary animal that has long been hunted for its pelt.