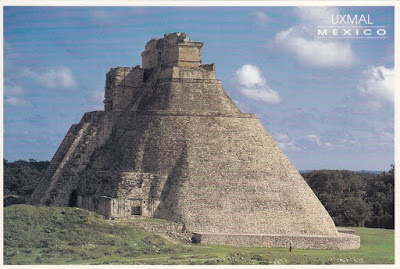 The Mayan town of Uxmal, in Yucatán, was founded c. A.D. 700 and had some 25,000 inhabitants. The layout of the buildings, which date from between 700 and 1000, reveals a knowledge of astronomy. The Pyramid of the Soothsayer, as the Spaniards called it, dominates the ceremonial centre, which has well-designed buildings decorated with a profusion of symbolic motifs and sculptures depicting Chaac, the god of rain.
Uxmal is located in the Puuc region of Mexico and was one of the largest cities on the Yucatán Peninsula. The name Uxmal means 'thrice-built' in the Mayan language, referring to the many layers of construction of its most imposing structure. The Pyramid is approximately 35-meters tall, as the measurements seem to be a matter of some kind of dispute. Nevertheless, it looks awe-inspiring, and I envy Brigitte on seeing it!