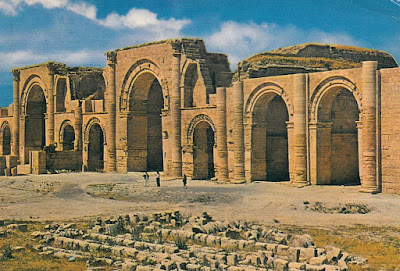 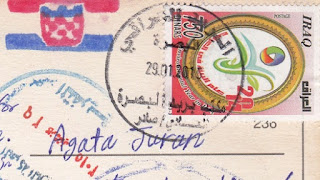 I have received this postcard a few months before the news reported about a horrific destruction of this treasured place...It is just devastating how history can disappear right before our eyes, and for what...:(( Thank you Hasanain for this card, I truly appreciate it, and hope for better years to come, here there, everywhere.

A large fortified city under the influence of the Parthian Empire and capital of the first Arab Kingdom, Hatra withstood invasions by the Romans in A.D. 116 and 198 thanks to its high, thick walls reinforced by towers. The remains of the city, especially the temples where Hellenistic and Roman architecture blend with Eastern decorative features, attest to the greatness of its civilization.