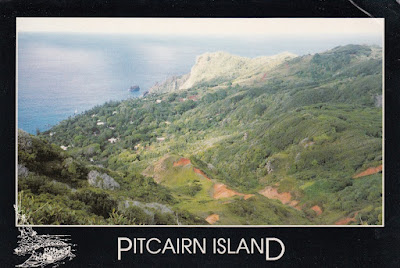 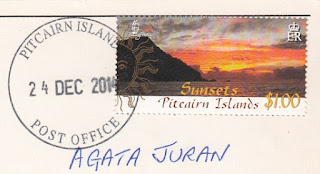 Ohoh I have completely forgotten to show a new country - received a year ago! Many many thanks to Susan for arranging this card for me :)
The Pitcairn Islands are a group of four volcanic islands ( Pitcairn, Henderson, Ducie, and Oeno ) in the southern Pacific Ocean that form the last British Overseas Territory in the Pacific. They are spread over several hundred miles of ocean and have a total land area of about 47 square kilometres (18 sq mi). Only Pitcairn, the second largest island measuring about 3.6 kilometres (2.2 mi) from east to west, is inhabited by the descendants of the Bounty mutineers and the Tahitians (or Polynesians) who accompanied them, an event retold in numerous books and films. Amazing!
This view shows Adamstown, the only settlement on, and as such, the capital of, the Pitcairn Islands. It has a population of 56, which is therefore the entire population of the Pitcairn Islands - the hamlet currently holds the record for being the smallest capital in the world. It has access to television, satellite internet, and a telephone. The main means of communication is still the ham radio. According to Google Maps, the only named road in the capital is called "The Hill of Difficulty".