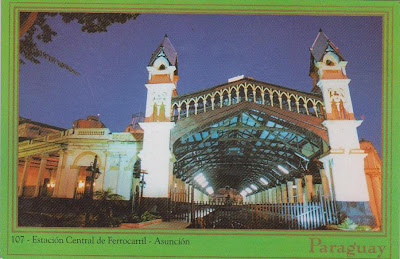 ﻿We did not go straight for Asunción, but it was the 1st place I found postcards...We spent some days further north prior to, in a small town on Rio Paraguay called Concepción, which for certain had boats going up the river :) But the tickets for cabins were sold out and we had to book them for next week - i was actually happy about that cos otherwise we might have spent less time in this awesome country! There were no real postcards (we were shown a local photo-shop to buy some, but they only sold their photos as postcards!), BUT a very friendly lady at the local PO who sold me different stamps and chatted about Paraguay :D
Edit: this may possibly be an Unesco tentative site, under the 'Carlos Antonio López Railway System'.