From La Paz on we have taken a somewhat irrational route heh. The decisions were made along the way - all I really knew is that I wanted to see some native animal (wild)life. So I read the Pantanal is a heaven on earth in that sense, but from Paraguay side its both cheaper and less touristy. We've taken a train to the Brasilian border as my friend was so certain we can catch a ride on Rio Paraguay from there - though it wasnt mentioned anywhere! :P﻿ We came to Corumbá and found nothing of the sort - only blank looks and ads for the Brasilian Pantanal touristy tours. So we moved on south to Pedro Juan Caballero on the border of Paraguay. 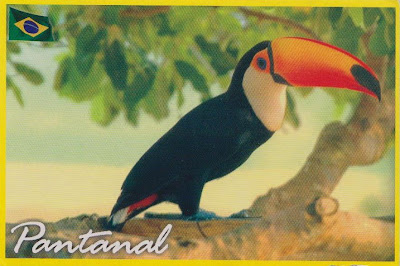 I really wanted to send a card showing toucan, this awesome and cool bird that I only used to see in the encyclopedia..! Until that lovely day while waiting for the train in San José de Chiquitos, when i spotted a pair flying over the station. They look so funny when flying! :D