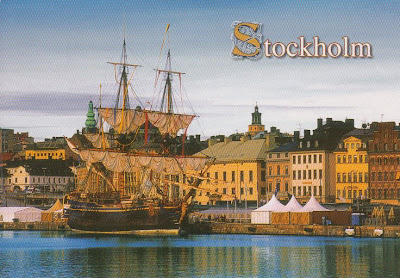 Another lovely card from Katja/lellykate for the RR :)

I really enjoy this view of the East Indiaman Götheborg, the world's largest operational wooden sailing vessel. It is actually a replica of the 18th-century vessel that sank in front of its harbour Gothenburg, returning from its third voyage to China. The remnants were found in 1984, and the replica was launched in 2003. Two years later it sailed the route to China, visiting many harbours on the way. The ship is still cruising the northern seas, so there still might be a chance to watch it glide thru the water :)