UNESCO - Rio de Janeiro: Carioca Landscapes Between The Mountain And The Sea, Brazil

The site consists of an exceptional urban setting encompassing the key natural elements that have shaped and inspired the development of the city: from the highest points of the Tijuca National Park’s mountains down to the sea. They also include the Botanical Gardens, established in 1808, Corcovado Mountain with its celebrated statue of Christ, and the hills around Guanabara Bay, including the extensive designed landscapes along Copacabana Bay which have contributed to the outdoor living culture of this spectacular city. Rio de Janeiro is also recognized for the artistic inspiration it has provided to musicians, landscapers and urbanists. 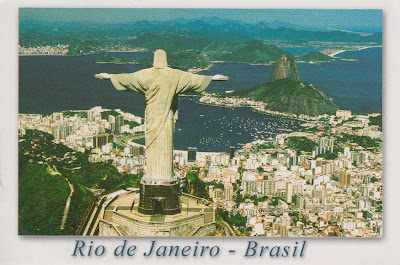 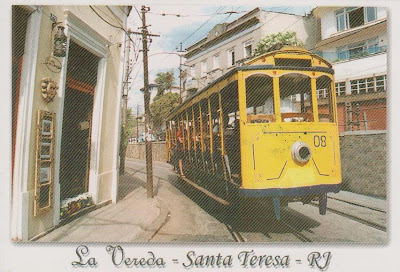 I believe these are my 1st cards of Rio! I was happy to do a swap with Cristina, she has such beautiful postcards :) And the stamps are great too, and the cancellations..!﻿
I love it on the first card how the statue of Cristo Redentor 'embraces' the city. It really looks like he's watching over everything and everyone :) In 2007 it was listed as one of the New Seven  Wonders Of The World - it is the largest Art Deco statue in the world and the world's 5th largest statue of Jesus Christ, with the height of 39.6 meters and the massive weight of 635 tonnes. It is situated on the Corcovado mountain, 700m high.
I hope to see the city and the statue 'live' one day...
as well as ride the only streetcar still active in the city, the beautiful La Vereda.
The Rio neighbourhood Santa Teresa has the only active tram line  in the city, which passes its winding, narrow streets and the colonial aqueduct. Santa Teresa is nowdays considered an artistic hotspot, dotted with many galleries and museums. Sounds like a 'must'!