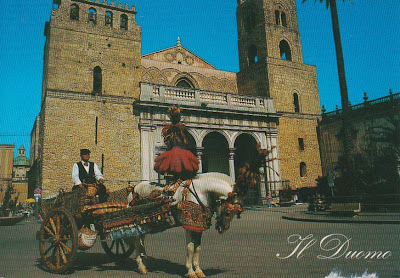 Monreale (or Murriali) is a town and comune in Sicily. It is situated on the slope of Monte Caputo and overlooking a very fertile valley called 'La Conca d'Oro'- meaning 'the Golden Shell'﻿ - famous for its oranges, olive and almond trees. Hmmm it sounds like a lovely place!
Its cathedral or Il Duomo (dedicated to the Assumption of the Virgin Mary) is one of the greatest extant examples of Norman architecture in the world..! It was built in the 12th century by William II and ranked as a metropolitan cathedral. The church is now an important national monument.

I must admit i was also attracted to the sight of the horse cart in front - i seem to like those a lot, i see another collection pending :) thank you Linda70 for this lovely card!