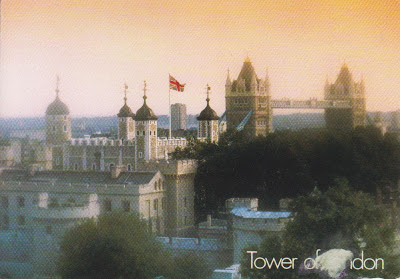 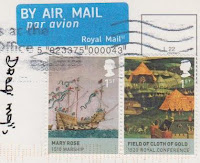 Her Majesty's Royal Palace and Fortress, more commonly known as the Tower of London, is a historic castle on the north bank of the River Thames in central London. The White Tower, which gives the entire castle its name, was built by William the Conqueror in 1078, and was a resented symbol of oppression, inflicted upon London by the new ruling elite.
The castle was used as a prison since at least 1100, and it was interesting to see the prison cells and read the stories about the prisoners in each of them. Gruesome times indeed! The Tower has served variously as an armoury, a treasury, a menagerie, the home of the Royal Mint, a public records office, and the home of the Crown Jewels of the United Kingdom - have seen the latter, and although am not a jewelry-enthusiast it was not to be missed heh.
Finally, some stamps have been cancelled! So many postcards that I've sent during my time in the UK have been uncancelled, or maybe just a sign of the orange strip done by the sorting machine...and white marks in the front done by it :/