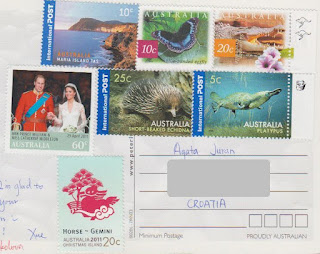 The Gondwana Rainforests of Australia is a serial property comprising the major remaining areas of rainforest in southeast Queensland and northeast New South Wales. It represents outstanding examples of major stages of the Earth’s evolutionary history, ongoing geological and biological processes, and exceptional biological diversity.
The Gondwana Rainforests are so-named because the fossil record indicates that when Gondwana existed it was covered by rainforests containing the same kinds of species that are living today. To explain, Gondwana the name given to the more southerly of two supercontinents (the other being Laurasia) which were part of the Pangaea supercontinent that existed from approximately 510 to 180 million years ago. Mindblowing eh?
The Unesco site includes a decent number of national parks and state forests, not sure at all which this view belongs to...but its awesomely green! Thank you lots Xue, and oh what a variety of stamps :))