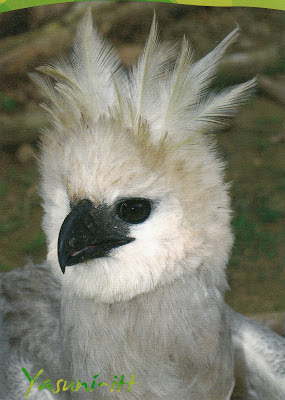 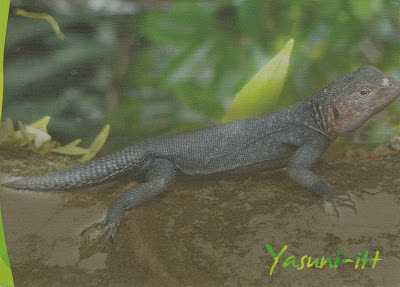 Yasuni National Park in Ecuador, about 250 km from Quito, was designated a UNESCO Biosphere Reserve in 1989. It is within the claimed ancestral territory of the Huaorani indigenous people. It is arguably the most biologically diverse spot on Earth.
Yasuni-ITT Initiative is a proposal by the government of Ecuador to refrain indefinitely from exploiting the oil reserves of the Ishpingo-Tambococha-Tiputini (ITT) oil field within the Yasuni National Park, in exchange for 50% of the value of the reserves. The rationale is to conserve biodiversity, protect indigenous peoples living in voluntary isolation, and avoid CO2 emissions.
These are some of the pre-paid postcard issued to support the ITT initiative, showing examples of that unique biodiversity. The Harpy Eagle (Harpia harpyja) I already have in my collection and on the blog :) A newcomer to my lizard collection is the Tropical Thornytail Iguana or Amazon Thornytail Iguana (Uracentron flaviceps) an elusive species of medium sized arboreal lizard found in the tropical lowlands of the Amazon Rainforest. Cute :)