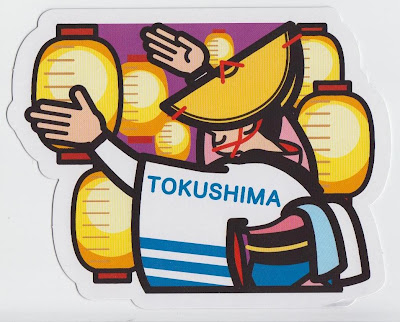 My first Gotochi card! Gotochi cards are designed and released by the Japanese Postal System, and each one of them represents a place in Japan - hence the name 'gotochi', which means 'local'. They showcase Japanese symbols on a national and regional level - every prefecture has multiple cards, each card with a cartoon picture and the name of the place that is depicted. While they are super-cute they are also more expensive to send than normal postcards - and so it is hard for Japanese postcrossers to send a lot of them.
(info found on the official postcrossing site)
And the last sentence explains why it took me a while to receive one of these...I haven't even swapped for it but Heather, who is living in Tokushima, sent it as a surprise in an envelope :) And the card represents a dancer participating in yearly Awa Dance Festival held every August in Tokushima as part of the Obon Festival. Groups of choreographed dancers and musicians known as ren (連) dance through the streets, typically accompanied by the shamisen lute, taiko drums, shinobue flute and the kane bell. Performers wear traditional obon dance costumes, and chant and sing as they parade through the streets.