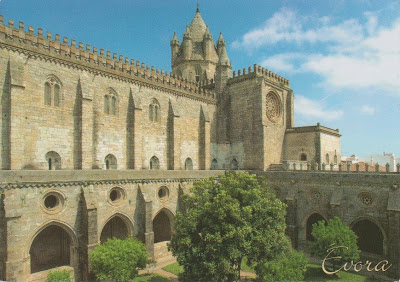 Évora is a Portuguese city in the municipality of Évora and a member of the Most Ancient European Towns Network. This museum-city, whose roots go back to Roman times, reached its golden age in the 15th century, when it became the residence of the Portuguese kings. Its monuments had a profound influence on Portuguese architecture in Brazil.
This postcard shows the Cathedral of Évora, one of the oldest and most important monuments in the city, lying on its highest spot. This first building, built between 1184 and 1204, was very modest and was enlarged circa 1280-1340, this time in early Gothic style. The cathedral received several valuable additions through time, becoming the largest of the mediaeval cathedrals in Portugal and one of its best examples of Gothic architecture.

Many thanks for this addition Marta :)