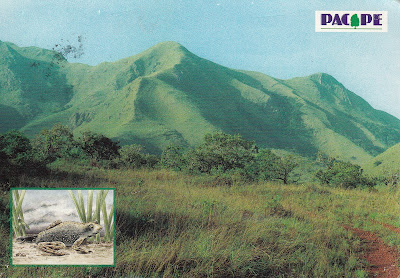 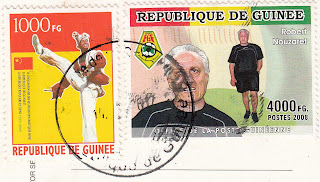 Mount Nimba Strict Nature Reserve is a protected area and UNESCO World Heritage Site in both Guinea and Côte d'Ivoire. A further extension of the reserve to include areas in Liberia has also been proposed. The park includes significant portions of Mount Nimba, a geographically unique area with more than 200 endemic species. These species include multiple types of duikers, big cats, civets, Chimpanzees, and several types of viviparous toads (the latter probably depicted in the down left corner of the postcard).
I had to look up 'viviparous'..! It means that the development of the embryo happens inside the body of the mother, eventually leading to live birth. Cool, I had no idea there are such toads :)
This card is awesome on so many levels - it is my 1st w&s postcard from Guinea, its the country's only Unesco site, I have won it in a lottery and its sooo green! Oh and the stamps are great and cancelled; thanks so much Madeleine!!