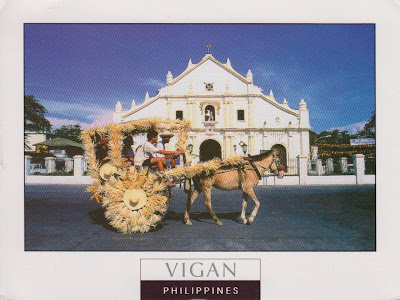 Established in the 16th century, Vigan is the best-preserved example of a planned Spanish colonial town in Asia. The city of Vigan is situated on the west coast of the island Luzon, facing the South China Sea. Its one of the numerous Hispanic towns that are characterised by a unique architectural fusion of Philippine building design and the typical colonial European constructions - which is one of the reasons why it is enlisted as an whs unesco site.
Calesa is a Philippine horse-drawn carriage, mode of transport introduced by the Spaniards in the 18th century. This one is adorned for the annual calesa festival. Behind it is The St. Paul's Cathedral, a burial place for the great Ilocano poet Leona Florentino.
Thanks to private swap with Jeff :)
No stamps, but sometimes this kind of cancellation is interesting too ;) Only sometimes though! :D