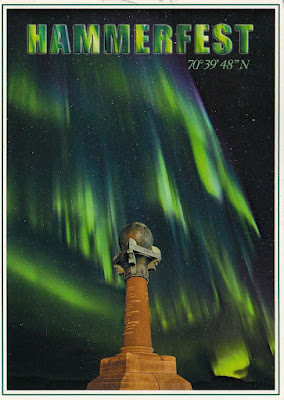 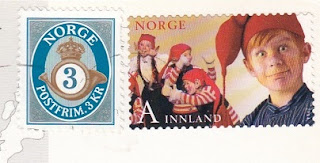 Finally the time has come to introduce the curious Struve Geodetic Arc, an UNESCO site stretching through no less than 10 European countries, and here is the northernmost of them. Thank you Tone :)

The Struve Arc is a chain of survey triangulations stretching from Hammerfest in Norway to the Black Sea, through 10 countries and over 2,820 km. These are points of a survey, carried out between 1816 and 1855 by the astronomer Friedrich Georg Wilhelm von Struve, which represented the first accurate measuring of a long segment of a meridian. This helped to establish the exact size and shape of the planet and marked an important step in the development of earth sciences and topographic mapping.
In 2005, the chain was inscribed on the World Heritage List as a memorable ensemble of the chain made up of 34 commemorative plaques or built obelisks out of the original 265 main station points which are marked by drilled holes in rock, iron crosses, cairns, etc.
Some cards representing them have been received, many are still missing, of which again many probably were never put on a postcard...its a challenge ;)