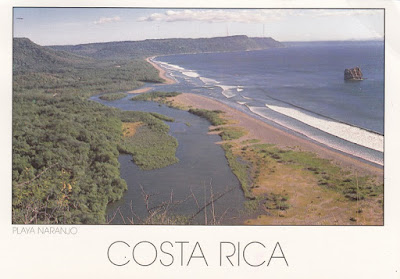 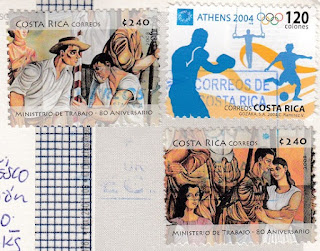 This is Playa Naranjo, part of Santa Rosa National Park, which is again part of the Area de Conservación Guanacaste in northwest Costa Rica. Many thanks to Marco :)

The Area de Conservación Guanacaste comprises 147,000 hectares of land and sea in the Northwest of Costa Rica. Encompassing several contiguous protected areas of various categories, the property is a mosaic of diverse ecosystems.
The visually dramatic landscape mosaic is home to an extraordinary variety of life forms. Next to the approximately 7,000 plant species, more than 900 vertebrate species have been confirmed. Some notable mammals include the endangered Central American Tapir, at least 40 species of bat, numerous primate species and several felids, namely Jaguar, Margay, Jaguarundi and Ocelot. Among some 500 bird species are the endangered Mangrove Hummingbird and Great Green Macaw, as well as the vulnerable Military Macaw and Great Curassow. Diversity of reptiles and amphibians is likewise high with charismatic representatives like the vulnerable American Crocodile and Spectacled Caiman. Several species of sea turtles occur in the property, with a nesting population of the critically endangered Leatherback and a massive breeding population of the vulnerable Olive Ridley. Invertebrate diversity is extraordinary with an estimated 20,000 species of beetles, 13,000 species of ants, bees and wasps and 8,000 species of butterflies and moths.

Oh man if I could only have a glimpse of this fantastic world! At least in the form of postcards...!