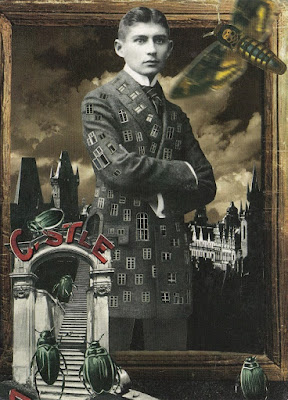 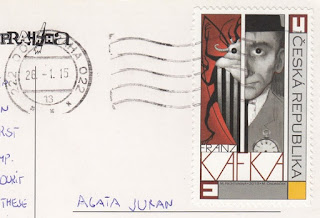 Franz Kafka must be one of the more interesting and widely known literary figures of the last century - he was born into a middle-class, German-speaking Jewish family in Prague, the capital of the Kingdom of Bohemia, then part of the Austro-Hungarian Empire. He trained as a lawyer, and after completing his legal education he was employed with an insurance company, forcing him to relegate writing to his spare time. Over the course of his life, Kafka wrote hundreds of letters to family and close friends, including his father, with whom he had a strained and formal relationship. He died in 1924 at the age of 40 from tuberculosis.

His work, which fuses elements of realism and the fantastic typically features isolated protagonists faced by bizarre or surrealistic predicaments and incomprehensible social-bureaucratic powers, and has been interpreted as exploring themes of alienation, existential anxiety, guilt, and absurdity. His best known works include Die Verwandlung (The Metamorphosis), Der Process (The Trial), and Das Schloss (The Castle). The term Kafkaesque has entered the English language to describe situations like those in his writing.

I have to admit I have only ever read parts of two of his books, 'the metamorphosis' and 'in the penal colony' (I believe they were part of obligatory reading in highschool/uni) as back then it was a bit heavy on my brain. I should definitely try to rectify that...also, as I've learnt his work is not so easily translated from German, I thought maybe I should try reading the original - now thats a challenge!! In any case I love this collage postcard and stamp, thank you Anna :)