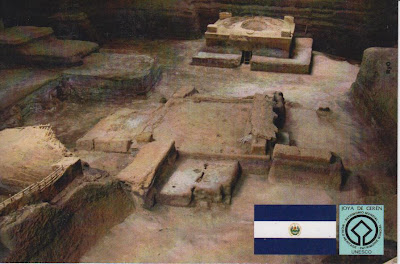 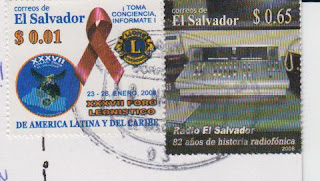 El Salvador is the smallest and the most densely populated country in central america, situated on the Gulf of Fonseca. It is also popularly known as 'la tierra de volcanes soberbios' (the land of proud and arrogant volcanoes).
On the card you can see its sole Unesco WHS sight - Joya de Cerén Archaeological Site. It is in fact a pre-columbian Maya farming village, preserved remarkably intact under 14(!) layers of volcanic ash. it is often referred to as the 'Pompeii of the Americas'. the important difference is, people managed to flee the disaster on time (no bodies were found) - but they left all their belongings behind, and even half-eaten food!


This is my 1st written & stamped card from El salvador, thanks to Guillermo of FB postcrossing team :)


As i am planing to visit Central America later this year (nothing is certain yet but i do lean towards it) i will include this site in my itinerary!
Posted by agi at 10:59