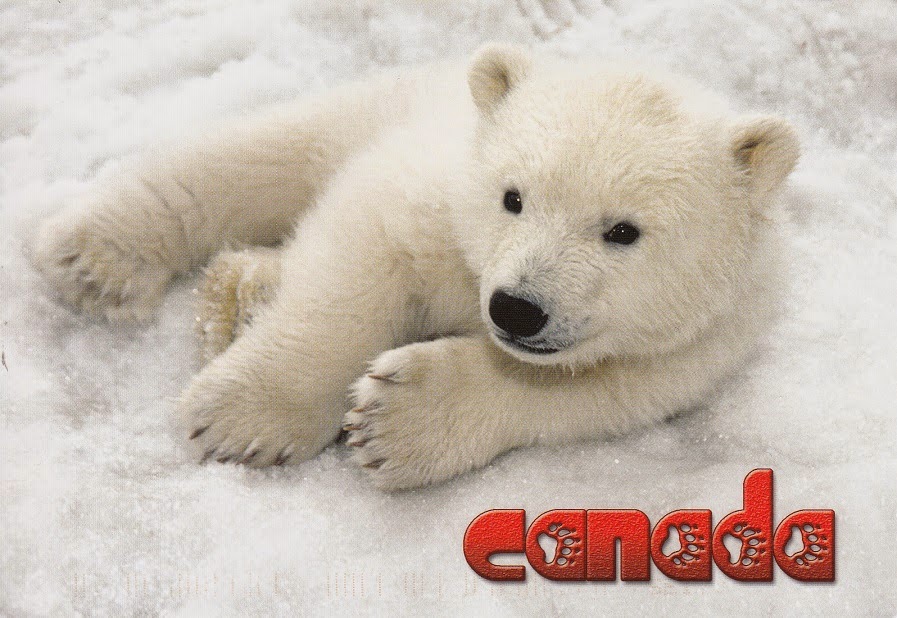 I had no idea what I'll receive in my swap with Marie - and there comes this gorgeous polar bear cub! And aren't the letters just cute with the little paws prints? Thanks so much for this!
I am equally happy about these stamps issued  Friday the 13th last June, from a series telling some of the country’s most inexplicable and popular ghostly tales.

Edit: i really wanted to explore the meaning of these stamps...and thought I could share them on Sunday Stamps (this week being an open theme). They are also apt for the upcoming Halloween - a holiday not traditional in my country but is surely sneaking in..!

The issue called Haunted Canada comprises 5 stamps, and is start of a continuous series planned for years to come. They are as follows:
*Ghost Bride Of The Fairmont Banff Springs Hotel
Employees and guests have reported seeing a figure with a long, flowing dress descending the stairs. She is believed to be a bride who tripped and fell to her death on her wedding day.
*St. Louis Ghost Train
There are tales of a ghostly glowing light, known as the 'St. Louis light', in the Saskatchewan River Valley. Those who believe in the ghost train claim it's the long-dead CNR conductor who literally lost his head back in the 1920's to a passing train while examining the track with his lantern.
*The Haunted Of Fort George
Due to battles of the War of 1812 and their aftermath, spirits are said to still be seen or heard wandering within its stone walls. Cold spots, crying, moaning and the sound of footsteps have all been reported. Tales  are told of people having being poked or having their hair pulled, only to turn around and find no one there.

Brrr this last bit made me shiver. I will be turning around a lot now as a useless matter of precaution lol. Other entries via link: