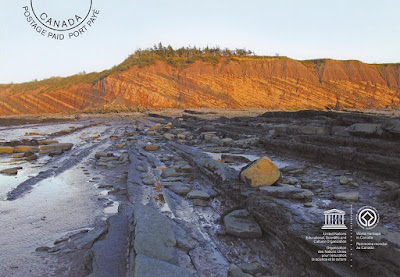 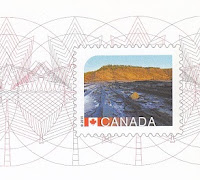 From the series of Canadian pre-paid UNESCO cards: The Joggins Fossil Cliffs is a 689-ha palaeontological site along the coast of Nova Scotia (eastern Canada), described as the “coal age Galápagos” due to its wealth of fossils from the Carboniferous period (354 to 290 million years ago). There are remains and tracks of very early animals and the rainforest in which they lived, left in situ, intact and undisturbed; there are 96 genera and 148 species of fossils and 20 footprint groups to be found here. The site is listed as containing outstanding examples representing major stages in the history of Earth.
What is also interesting to note here is that the site is situated in the Bay of Fundy, which has the highest tidal range in the world - in specific, Burntcoat Head in Nova Scotia, where tides average 17 meters (it can go over 20 meters). This area is where I'd love to spend time slow-travelling, eastern Canada in general - though taking the iconic train all across to Vancouver would make it perfect. Sadly such extensive travels might be a thing of the past for me...Still, fingers crossed.