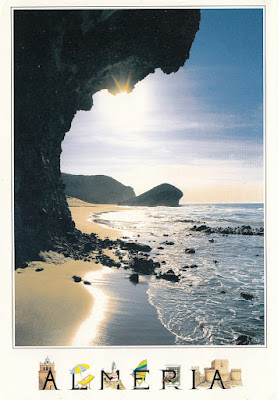 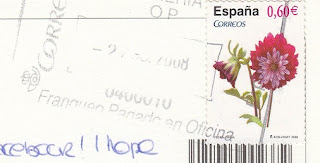 One of the first swaps I had on FB was with Angela from Almería, who sent me this summery view of the nearby Playa de Mónsul (we are having a sort of a heatwave here (30 DegC), much like most of Europe, so a beach view seemed appropriate). This beach is situated in the Cabo de Gata-Níjar Natural Park, which is Andalucia's largest coastal protected area, a wild and isolated landscape with some of Europe's most original geological features. Spain's southeast coast, where the park is situated, is the only region in mainland Europe with a true hot desert climate.
The name Cabo de Gata relates to the mineral agate that used to be mined in this area. In 1997 it was designated as a UNESCO Biosphere Reserve.