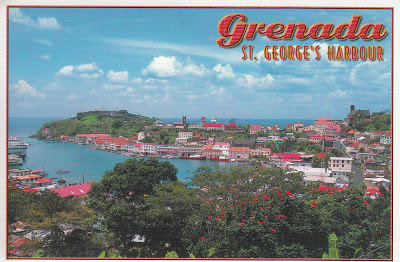 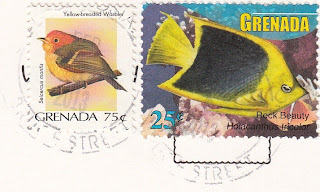 St. George's is the capital of Grenada  -  a city surrounded by a hillside of an old volcano crater and situated on a horseshoe-shaped harbor. It is a popular Caribbean tourist destination with a moderate tropical climate that ensures the success of spice production. Both its fortified system and historic district are placed on the Unesco's tentative list.

The little birdie is a yellow-breasted warbler; the colourful representative of sea creatures is Holacanthus tricolor also known as the rock beauty, a species of marine angelfish that inhabits reefs from the tropical western Atlantic Ocean to the northern Gulf of Mexico.
Posted by agi at 09:42