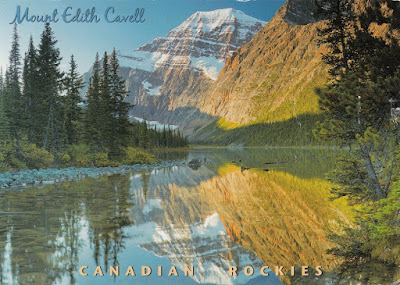 I really REALLY feel like escaping to the mountains to reconnect with nature! Its been too long. This view fascinates me, its absolutely stunning don't you think? As this WHS site comprises 7 national/provincial parks, I will post one at the time, in hope I will indeed collect all seven of them. Thanks so much for this one Katie - and she lives a short drive away from some of these parks, uhh ohh..!

Jasper National Park is the largest national park in the Canadian Rockies, spanning 10,878 square km. It is located in the province of Alberta, north of Banff National Park and west of Edmonton. The park includes the glaciers of the Columbia Icefield, hot springs, lakes, waterfalls and mountains. Its most prominent peak is Mount Edith Cavell, named in 1916 after an English nurse executed by the Germans during World War I for having helped Allied soldiers escape from occupied Belgium to the Netherlands.