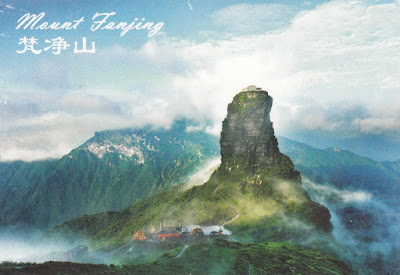 Located within the Wuling mountain range in Guizhou Province in southwest China, Fanjingshan ranges in altitude between 500 - 2570 metres above sea level, favouring highly diverse types of vegetation and relief. It is an island of metamorphic rock in a sea of karst, home to many plant and animal species that originated in the Tertiary period.
Also Fanjingshan is considered a sacred mountain of Chinese Buddhism, ranking just behind The Four Sacred Mountains. During the Ming Dynasty 48 Buddhist temples were built on the mountain, many of which have since been destroyed; the ones that remain are now significant pilgrimage sites. This postcard shows the New Golden Summit, or the Red Clouds Golden Summit.
Again thanks to Tianyi :)