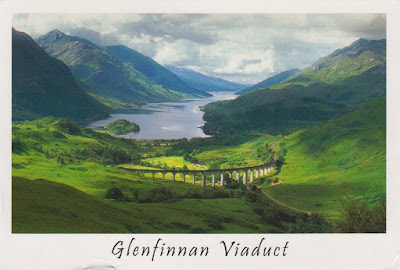 The Glenfinnan Viaduct is a railway viaduct on the West Highland Line in Glenfinnan, Inverness-shire, Scotland. Located at the top of Loch Shiel in the West Highlands of Scotland, it overlooks the Glenfinnan Monument and the surrounding waters.
The West Highland Line connects Fort William and Mallaig, and was a crucial artery for the local fishing industry and the highlands economy in general, which suffered enormously after the Highland Clearances in the 1800s.
The viaduct may seem familiar to you as it has been used as a location in several films and television series, most notably in four of the Harry Potter movies :)
Thank you Alan!

The summer season is in full swing, which means work overload for me...not that I don't have free time, but when I do, I feel tired for lack of sleep and high temperatures. Energy zero...no, minus twenty. I even haven't sent any postcards in this time; more tragically, I failed to report those that have arrived through swaps...A month to go and hopefully the overall air will change..!