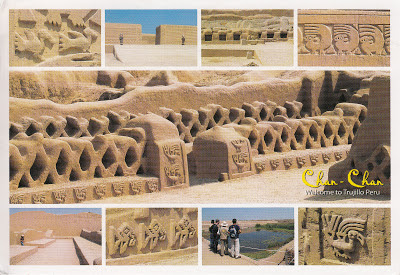 The Chimu Kingdom, with Chan Chan as its capital, reached its apogee in the 15th century, not long before falling to the Incas. The planning of this huge city, the largest in pre-Columbian America, reflects a strict political and social strategy, marked by the city's division into nine 'citadels' or 'palaces' forming autonomous units.


Chan Chan is an archaeological site in the Peruvian region of La Libertad, five km west of Trujillo - it is the largest Pre-Columbian city in South America. It is severely threatened by storms from El Niño, which cause heavy rains and flooding on the Peruvian coast. I have been to this site twice, love the intricate designs like shown on the postcard :)